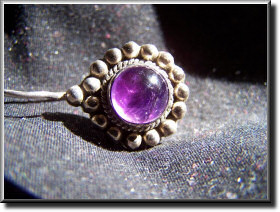 While studying to present God’s word to ladies at Woman to Woman and wanting to keep with their theme Refining Jewels, I discovered a beautiful picture of God’s love for His children. Malachi 3:16-18 tells us,

“Then those who feared the Lord spoke to one another, and the Lord listened and heard them; So a book of remembrance was written before Him for those who fear the Lord and who meditate on His name. ‘They shall be Mine,’ says the Lord of hosts, ‘On the day that I make them My jewels. And I will spare them as a man spares his own son who serves him.”

God considers those who love him to be jewels, or special treasure other translations write the word. Wow! Special treasure. I remember hiding special treasure as a child. My cousin Russ and I buried a box in our grandmother’s back yard. We collected grand objects. Rocks, broken colored glass, and my mother’s amethyst earrings.

I’ve never owned many jewels, but I treasure the ones I have. They are gifts. Jesus says in John 17:6 that God has given Him those who believe. “They were Yours, You gave them to Me, and they have kept Your word.” And we learn that as believers were are special to God. 1 Peter 2:19 includes that we are “His own special people, that you may proclaim the praises of Him who called you out of darkness into His marvelous light.”

When you think about your gems or jewelry, be reminded that God thinks you are a special treasure. Thank Him for His mercy made new every morning.