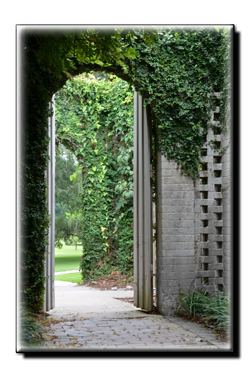 A cute, little Carolina wren found his way into our house. I’m sure he flew in innocently, then realized he didn’t know how to get out. Feeling trap, he flew this way and that way, searching for a path to freedom. He landed on picture frames, hitting one over. He perched on top of a cabinet to look for a way of escape.

Seeing the eating nook windows, he headed that way, to what he was sure was the outside. What he thought would be liberty blocked his way and even knocked him backwards.

Don aided the tiny creature by opening the back door. We stood by to see if he could find the opening for the way out. In a short time, out he flew, disappearing quickly from our sight. We felt relief for the small intruder.

That experience caused me to think of people who, without realizing it, find themselves trapped. Sin so easily besets us. We try way after way to freedom, but we “knock over pictures” and “slam into windows.”

There is but one way to leave regret and gain abundant life. In John 10:9 Jesus said, “I am the door. If anyone enters by Me, he will be saved,…” (NKJV) Just as the little wren found the door and flew to freedom, I can picture a soul who walks through the Door to find freedom from shame and guilt and eternal life in Christ.